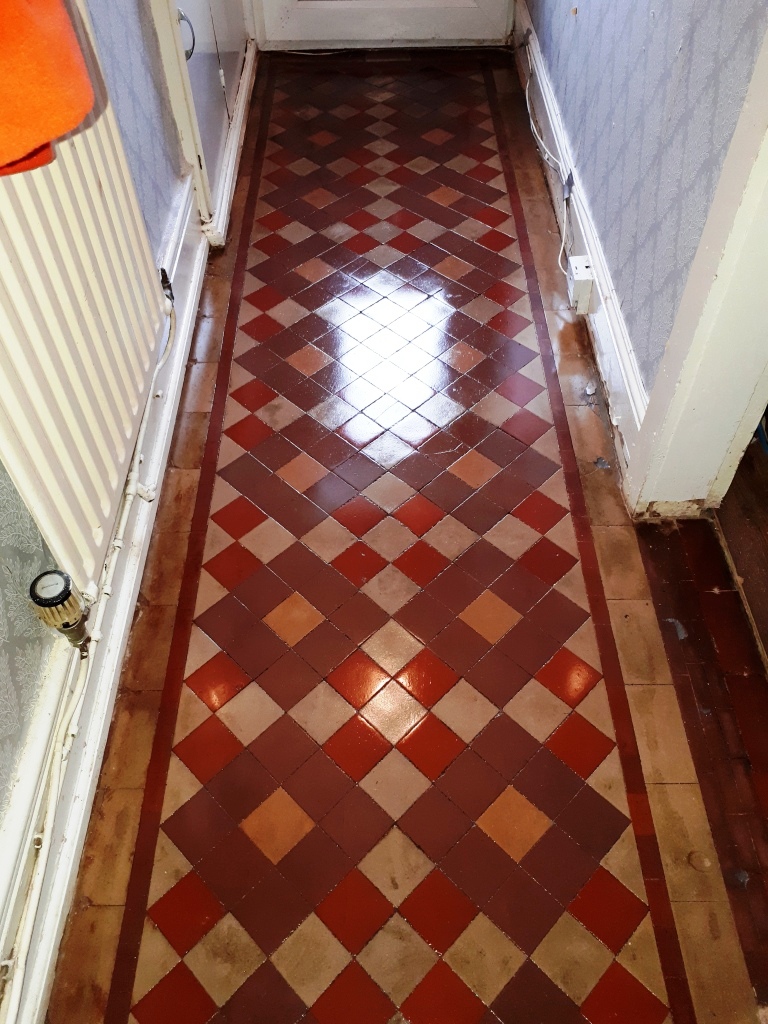 This customer from the Birmingham suburb of Erdington contacted me about an old tiled floor they had discovered in the hallway of their Victorian house whilst doing some renovation work. The tiles were in quite a state with ingrained dirt, adhesive, paint and some tiles were loose and cracked. The floor was so bad they were considering scrapping it and contacted Tile Doctor as a last resort just in case we could do something with it.

I went over to take a look and could see that as well as the problems reported to me over the phone that the tiles were also imprinted with what appeared to be the pattern of the underlay that must have covered the floor previously. Curiously there were some tiles by the front door which had what appeared to be holes drilled into them. There was also a porch area in front of the main entrance that needed renovating. 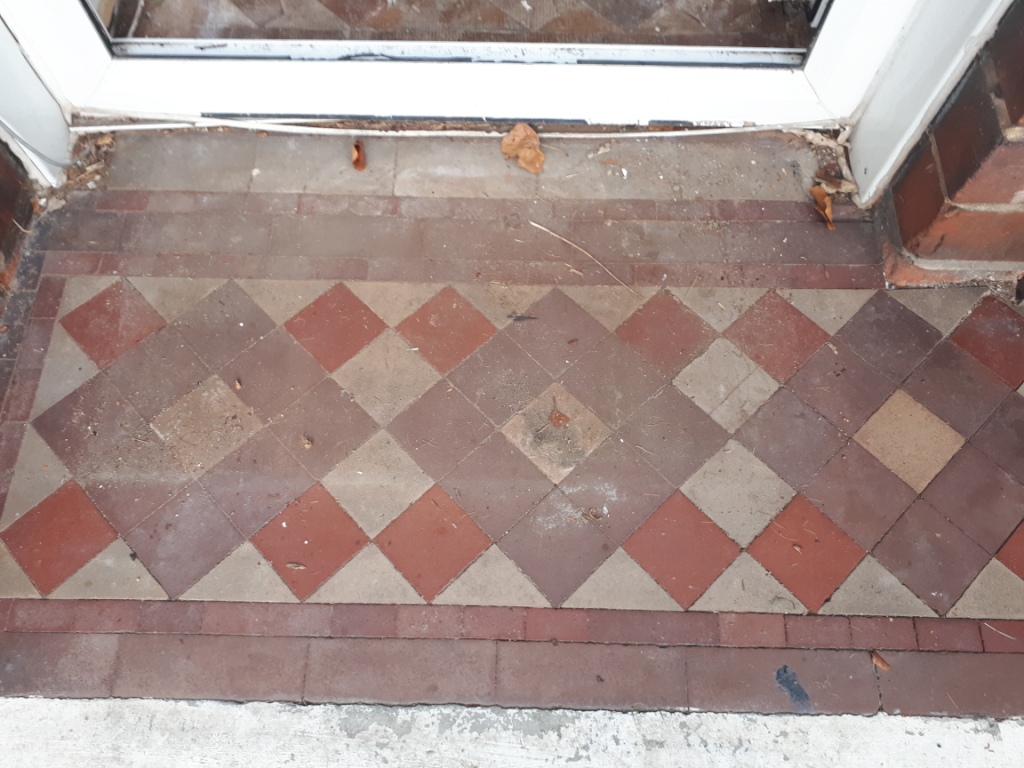 However, I have in fact seen floors in worse state that this one and was confident I could restore it. I worked out a quote for doing the work which was accepted, and the job was booked in for a future date.

My first task was to carefully scrape off as much of the paint and adhesive as possible using a sharp knife. Then it was cleaned with a 200-grit diamond pad fitted to a weighted rotary machine, this gets into the pores of the tiles which hang on to the dirt and loosens the grime and dirt, it also helps to grind off the pattern left by the rubber underlay. The pads struggle to get into the edges of the floor so that was cleaned by hand with diamond blocks. Once I was happy the floor the soil was rinsed off with water and then extracted with a wet vacuum. 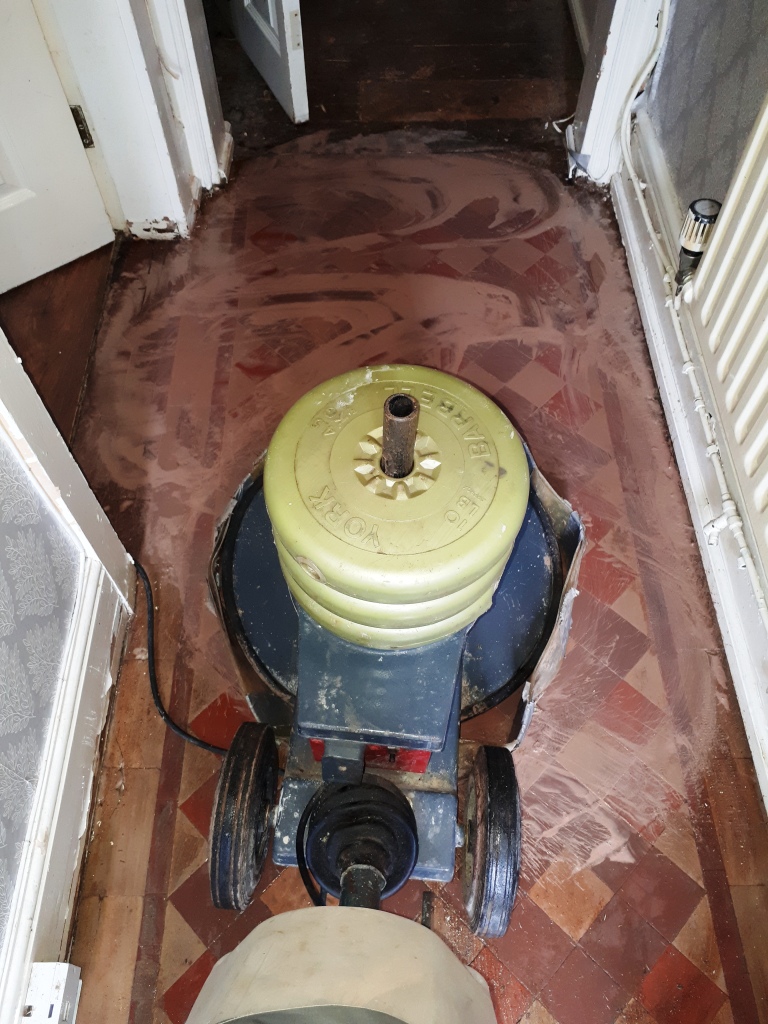 Next, I gave the floor an acid rinse with Tile Doctor Grout Clean-up scrubbed in with a 200-grit diamond pad again. This helped remove more dirt as well as helping to neutralize salt and mineral issues that may be present in the floor. This can be a big problem with old floors due to the lack of a damp proof membrane.

After rinsing and extracting again, I dried the floor off and went about resetting loose tiles and replacing some with replica tiles. These were grouted in along with other areas where the grout was loose and need of re-grouting.

I left the floor to dry out thorough for a couple of day and then returned to seal the tiles first checking with a moisture meter that the floor was dry. We always ensure that floors are completely dry before sealing them as excess moisture can damage the performance of the sealer.

I found no evidence of dampness in the floor, so it was sealed with multiple coats of Tile Doctor Seal and Go which will add protection and works really well on old Victorian tiles where it adds a nice subtle sheen appearance. Also, being water based it doesn’t leave a smell as it dries. For the porch area which was partly open to the elements I used Tile Doctor Seal and Go Extra which is a fully breathable sealer that will cope well with the damp conditions.

The floor was unrecognisable from before and the customer was very happy with the transformation. Before leaving I left the customer with a bottle of Neutral pH tile cleaner that they can use going forward to help maintain the tiles appearance. 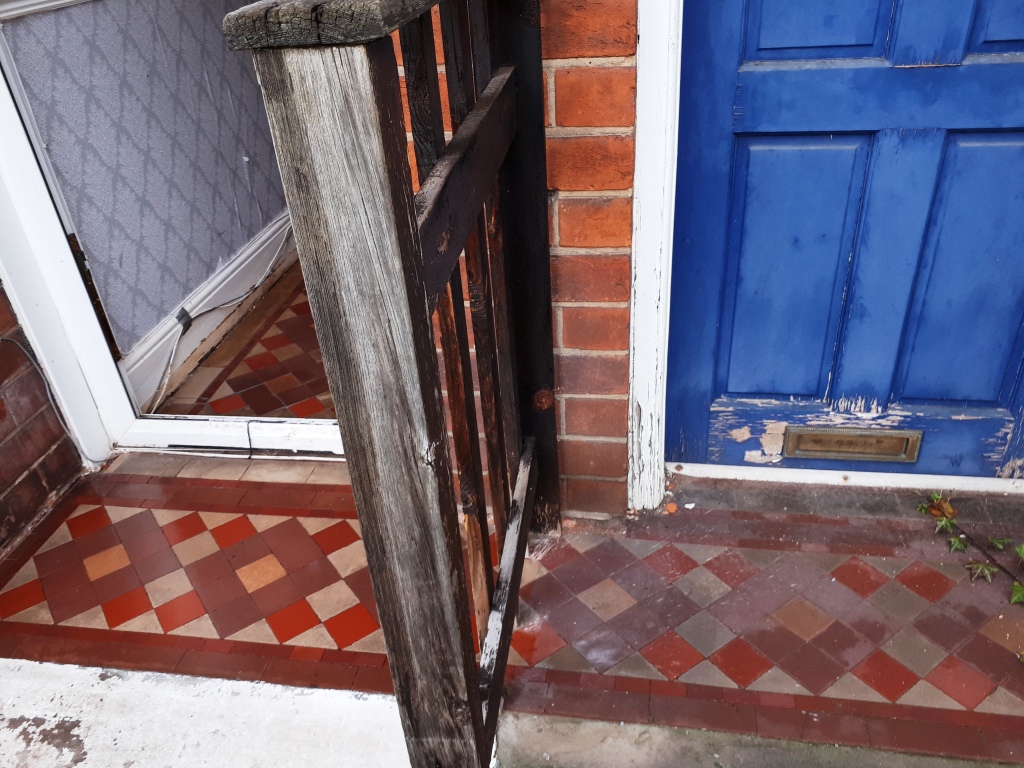