This homeowner in Edgbaston contacted me about a Victorian tiled floor they had found under the hallway carpet since moving into the property a couple of months ago. The floor was stained with paint splatters, adhesive and had loose and missing tiles. Original features such as Victorian floors can add a lot of value to a property so they wondered if it could look a lot better than its present state. 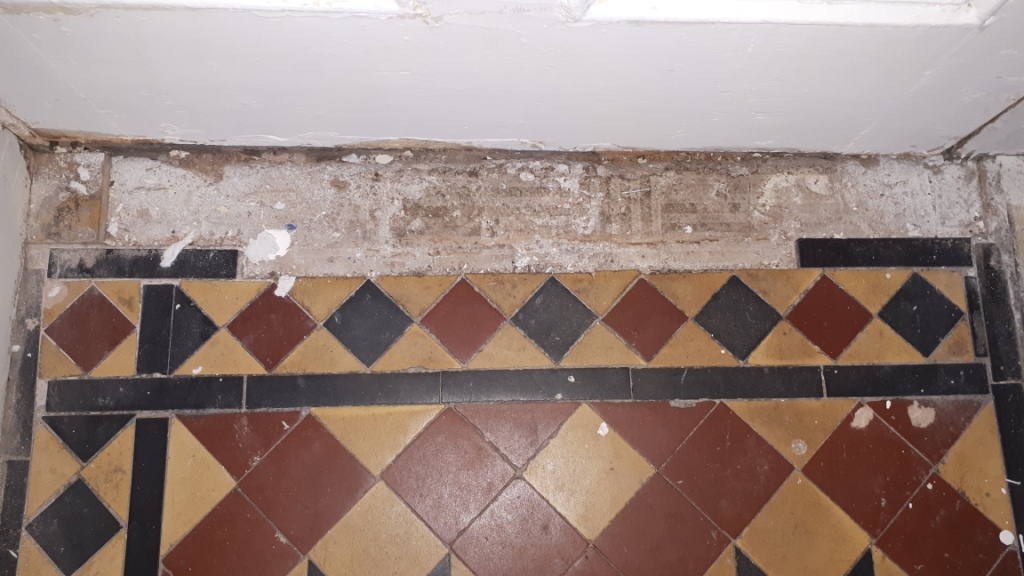 I visited the property in Edgbaston which is a suburb of south Birmingham and best known for its Cricket ground which is home to the Warwickshire Cricket Club. I surveyed the floor and run a test clean on part of the floor to work out how best to clean it. The old Victorian tiles responded well to the treatment which impressed the homeowner and so the job was booked in. 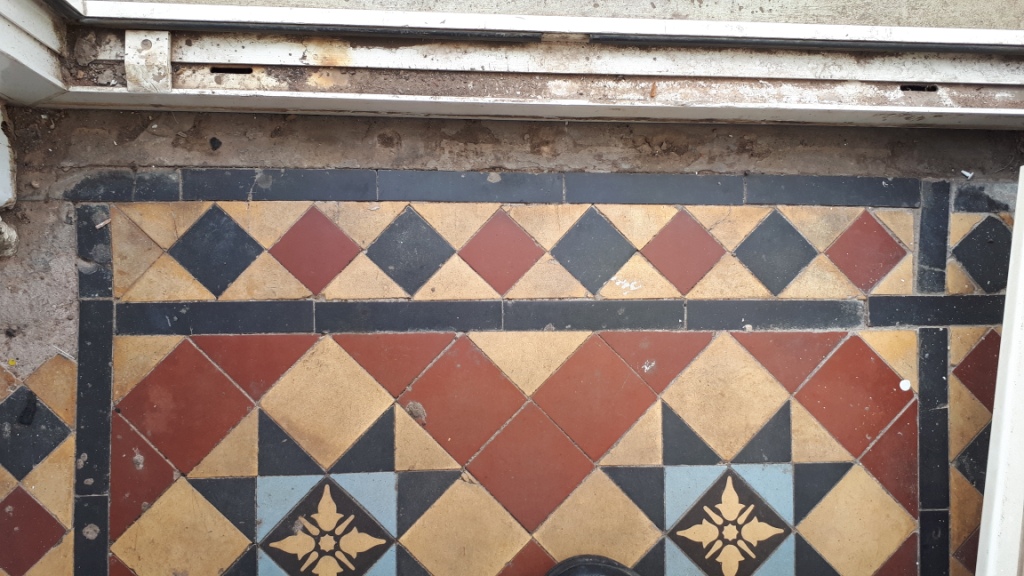 On the first day I cut and laid replacement tiles around the door threshold that I had sourced before starting the job. Then I reset some loose tiles and added some replacements on another threshold. 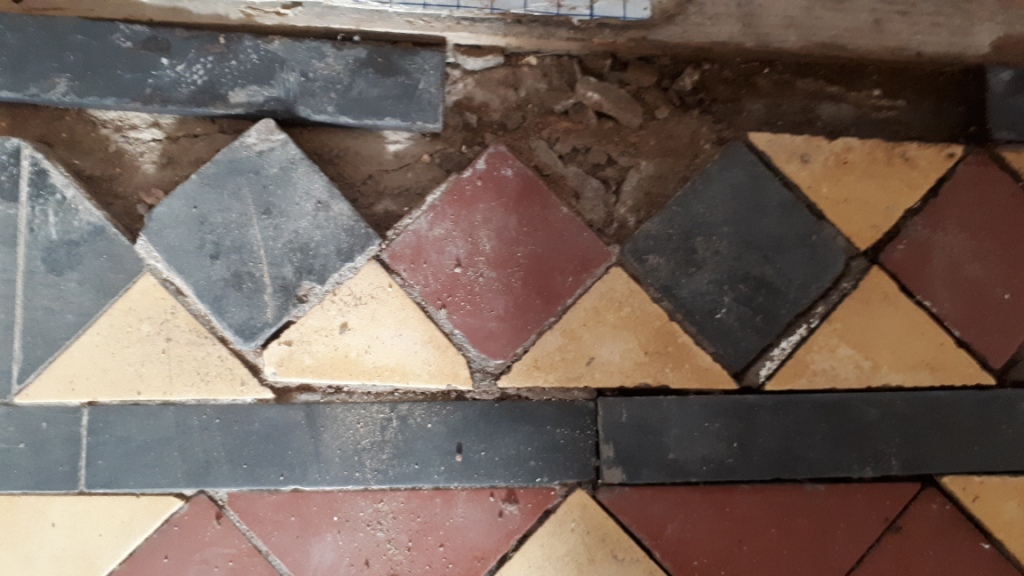 The front door had been replaced in the last couple of years, but it had been moved outwards which exposed part of the inner doorstep at the end of the hallway. I suggested that it would look better with tiles running right up to the door, so I removed part of the concrete with an SDS drill and cold chisel to allow space for new tiles to be laid level with the existing floor. The tiles were set in place using a quick setting adhesive which allows for grouting after only a few hours. 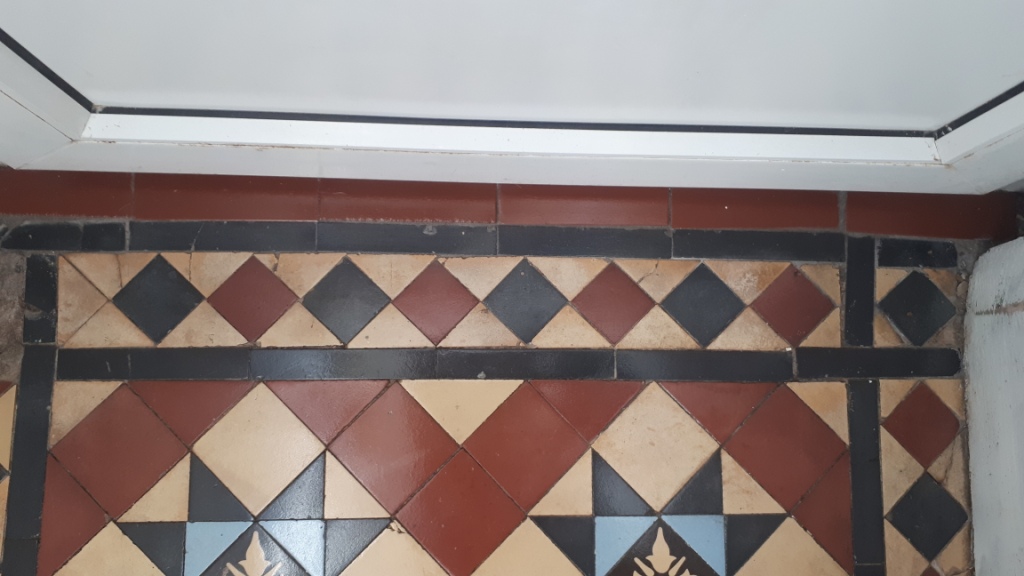 The next day I returned to deep clean the floor first checking the repairs I had made the day before were now secure and had dried nicely. My next job was to remove the paint splashes which I did by carefully scraping the paint off the tiles along with any old adhesive.

Next, I covered the floor with a strong dilution of Tile Doctor Pro-Clean and allowed it to dwell on the floor for ten minutes. Then ran a 200-grit diamond pad over it which gets into the tiles pores and cleans them. The floor was then rinsed the floor with water and extracted the dirty slurry with a wet vacuum.

Final stage of the cleaning process was to give the floor an acid rinse using Tile Doctor Grout Clean-Up which helps neutralise the floor after using Pro-Clean which is alkaline. It also dissolves any unwanted salts trapped in the tile that might rise to the surface later, a process commonly known as efflorescence. I then rinsed and extracted the floor again before leaving for the day.

The cleaning process had been quite intensive so I left the floor for a couple of days before returning so it could dry out completely. The floor had dried well so I set about applying a sealer to the floor.

I sealed the floor with six coats of Tile Doctor Seal & Go extra which is a low sheen sealer which will protect the floor going forward. Seal and Go Extra also enhances the appearance of the tile adding colour and is also breathable so moisture can rise through the tile and not become trapped under the floor where it could cause problems. Using a breathable sealer is important for these old floors where no damp proof membrane exists under the floor.

The floor now looked fantastic and the customer had said originally that she wasn’t keen on the floor, but by the end she said she loved it. Before leaving I left the customer a bottle of Neutral Tile Cleaner to help maintain the tiles appearance without affecting the sealer. 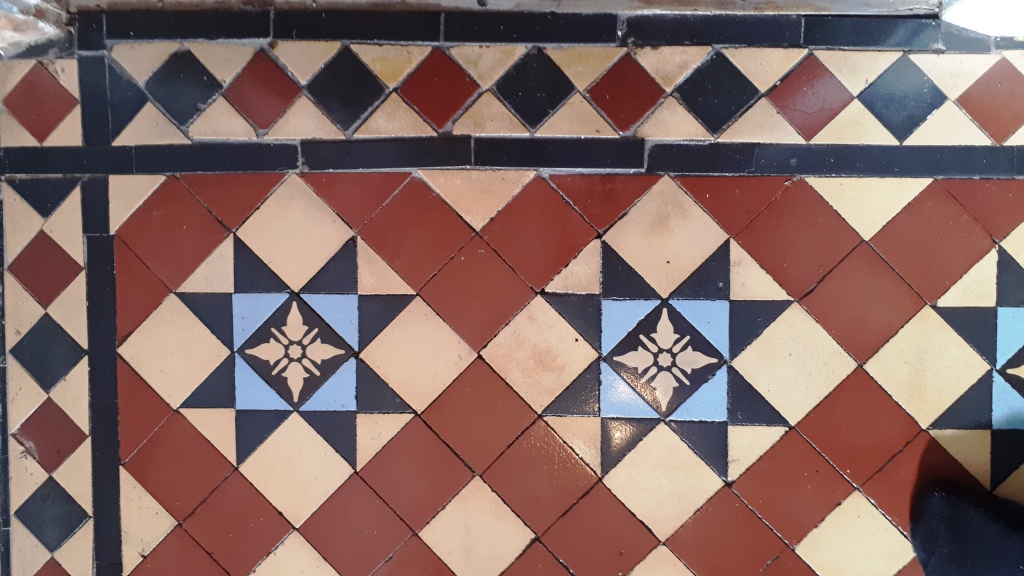 1 thought on “Repair and Restoration of a Victorian Tiled Hallway in Edgbaston, Birmingham”